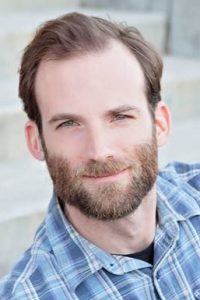 After his time served in the Navy, Ashley relocated to Hollywood, California to pursue an education and career in the music industry. While living in Hollywood, he also found success as a Hollywood Tour Guide.  In his second year of providing tour guide service,  Ashley was named ‘best tour guide in Hollywood’ by Hollywood Reporter Magazine.  As time went on, Ashley found himself losing interest in living in the fast- paced, smoggy life of the big city.

Ashley moved to La Grande, Oregon in the fall of 2012 to be with his closest friends from the Navy. In La Grande, Ashley has become very involved in the community.  He participates in various organizations and committees including the La Grande Main Street Downtown program.  He’s a co-founder of the Eastern Oregon Beer Festival and he founded the La Grande New Years Eve Block Party. Currently, Ashley also sits on the board of directors for the Union County Chamber of Commerce and the City of La Grande’s Budget Committee.